Marker is Ken Vandermark’s newest ensemble as a leader and includes Andrew Clinkman and Steve Marquette on guitar, Macie Stewart on violin and keyboard, and Phil Sudderberg on drums, in addition to his instruments of tenor & baritone sax, Bb & bass clarinet.  Continuing Ken’s interest in creating new compositional forms for improvised music, he has devised a performance system that not only employs variable order through collage, but has added superimposition to the structuring of material to create another layer of possibility for the organization of the sets.  The music of Marker expands the conventional orchestration for an improvising quintet, and is deeply inspired by Bernie Worrell’s keyboard work with Parliament Funkadelic and Talking Heads, contemporary classical music, the guitar work of post-punk groups like Wire and The Ex, and groove methodologies from Brazil, Afro-Beat, and funk.

The band began working together in September of 2016, workshopping a series of Ken’s compositional experiments until he was able to create a different method of spontaneous organization than those he uses with his group Made To Break and in the quartet with Steve Heather, Jasper Stadhouders, and Nate Wooley, called Shelter.  At the beginning of December, after several practice sessions had taken place during the autumn, Ken discovered a unique way to separate the material into three specific types (melodic, tableau, or game) that could be played individually or in any combination, with the ability to vary these sequences from performance to performance.  This approach took his interest in cinematic construction methods and applied it to the development of music for improvisers more deeply than ever before.

The results of this initial breakthrough were presented at the first Markerperformance, which took place on January 21st, 2017 at Elastic Arts in Chicago, during Tim Daisy’s “Hit The Ground Running” fundraiser for Planned Parenthood.  The fundamental aesthetics for the ensemble were in place, but another primary challenge had not been resolved – that of investigating the idea of memory with music.  Marker resumed an intense rehearsal schedule throughout the summer of 2017, further developing the construction principles Ken had developed specifically for the ensemble.  At the end of July he had two performances at the Stone at the New School in New York and visited the Rauschenberg retrospective at MoMA, “Robert Rauschenberg: Among Friends,” spending most of his time with the silkscreen paintings.  This experience enabled him to visualize an additional way to organize the compositions, one that would create opportunities to put thematic material forward and backward in the chronological time of Marker’sperformances.

During August of 2017 the band had a residency in Milwaukee at the Sugar Maple, playing three Sundays in a row.  At the final concert the ensemble also performed a live soundtrack composed to accompany Chris Marker’s film, “La Jetée.”  This series of concerts solidified the foundation for the group’s music, preparing it for a show in Chicago at the Hungry Brain for the Instigation Festival on September 8th and then for a recording session for its first album, to be held at Experimental Sound Studio at the end of that month.  In early 2018 Marker will take its music on the road for the first time, performing at the New Orleans version of the Instigation Festival in late January, and then continuing with a series of concerts for audiences in the South East of the United States.  Audiographic Records released the first album by Marker in December of 2018, entitled “Wired For Sound”

(AGR-013), and which a testament to the power of collective thinking in the development of ideas, and captures a dramatic series of creative musical breakthroughs for all involved. 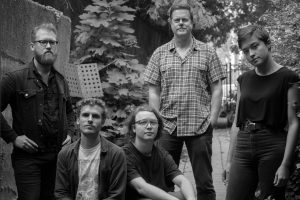