Still some logistics and details to sort out, but here’s a preview of the majority of dates for the upcoming tour with Tim Daisy, Kristof Curzmann, and Casper Tadhouders- the band:

MADE TO BREAK- North American Tour 2016

Be there if you can! 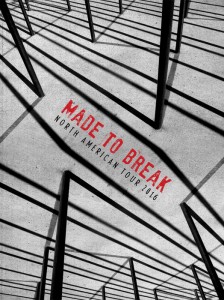