Sometimes the puzzle pieces automatically fall into place. The idea of working with short residences has been around for a while at Sound In Motion, while Ken Vandermark has also been looking for a way to give the endless international tour a new twist. And so it happened, with a two-day in which Vandermark’s band Marker played as a quintet, but on a second day it was also extended to a nonet containing four young Belgian musicians. And if the band leader at the end of the tour, of which these Antwerp concerts were the final exclamation point, writes that it became one of the highlights of his career, then that says enough about the result. This was one to frame.

With their latest album New Industries under their arm, the quintet flew over to Europe for a series of concerts in Poland, Hungary, Austria, Germany and Belgium, always compiling programs with local representatives of the improvisation scene. One time that happened with a series of small constellations that started improvising, the other, as in Antwerp, with a band that was sensitively expanded. In that respect, the audience was treated to a double premiere at De Studio, because Vandermark had written four new compositions especially for the final concert. Rehearsing two afternoons is not exactly a great luxury for musicians who do not know each other and play new material, but discipline, zest for work and talent for talent led to a powerful performance.

The first day was still on Marker in normal line-up, with in addition to Vandermark (tenor sax, clarinet) the guitar duo Steve Marquette and Andrew Clinkman (one almost alarmingly unmoved, the other constantly engaged in a solo dance), multi-instrumentalist Macie Stewart (violin keys) and drummer Phil Sudderberg. They played two compact sets in which the New Industries material was turned inside out. With “Alpahville” (a reference to Godard) in the headline, it immediately got off to a good start, with noisy howls of the guitar players positioned next to each other, an energetic sax solo by the leader and close interplay. If something became clear, then how ingeniously the composed parts of the compositions were interwoven, passed on via improvised sticks and constantly changed helmsmen.

Here and there visual signs were given to announce a transition, but at no time did you feel that this band did not play with a strong, collective focus and made its way past chamber music-like passages, violent cramping outbursts, rock-tinted grooves regular moments of beneficial openness – something that would also be preserved on the second day. And if anyone thought that such a young band, with musicians who have a little less experience than the people that Vandermark usually plays with, would miss the baggage or panache to keep up with the leader, then that lick would go, because Marker showed itself as a driven and flexible group that unpacked at times with a crackling tension and unified focus that could not prevent the quintet from surprising itself with spicy demarches. 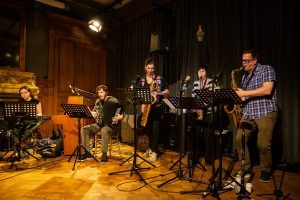 For day two, the quintet was supplemented by four musicians that Sound In Motion had introduced: alto saxophonist Audrey Lauro, baritone saxophonist Hanne De Backer, bassist Farida Amadou and accordionist Stan Maris – all of them musicians who had already appeared at the Antwerp organization. Maris was perhaps a somewhat surprising choice, given his young age and the fact that he does not have much experience with improvisation in such a context, but it turned out to be a good move, because the accordion added an original timbre to the overall picture. Maris soon turned out to be an excellent extra link, which, by the way, kicked off the second day with a great introduction to “Scratch Vocal”. That pushed the electricity aside for a systematic structure that already showed how the nine-member company would never cheat each other. Not only was the unwieldy, collective pumping so avoided, but there was also a constant change of active cells and roles.
In this way a groove could be created in which the guitarists were not present (such a Macie Stewart absorbs that without any problems), short call & response games were created and the numerous cues of the quintet remained something about musicians and audiences. to keep a lesson. More signals and instructions from the leader were naturally needed, but the nonet ran smoothly and moved from sober chamber music passages to free interaction and abrupt but perfectly executed twists. A piece dedicated to the recently deceased Agnès Varda initially fitted in closer to Marker’s cinematic compositions, with pointed guitar work and nice roaring baritone sax, and Vandermark who directed his troops along razor-sharp 180 ° turns and a soothing group sound that here and there even recalled his international Territory Bands. It was nice to hear how solo explorations (Amadou used clever effects and textures, while De Backer hyper-expressively searched for the extreme contrasts) were interspersed with group passages and moments of apparent cacophony were transformed into concussions. A key role was also played by Sudderberg and Stewart, who each made a great impression in their own way. 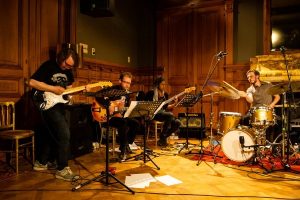 More spectacle followed in the second set, which again focused on broad dynamics, with bare sections that gradually thickened to a white-hot lava flow, giving way to bursting no-nonsense grooves, temporary dreamings (a solo by Maris called the unique 80s avant- David Thomas pop to life) and non-idiomatic improvisation. The hatch was actually the moment where it all came together and the group got wings. With the finish line in sight, the pleasure of playing became more and more visible, you could almost feel the electricity in the air and playing music became playing rather with music. The combination of support (Maris and Amadou that kept a motive going) and freedom (driven solo work by Lauro and the guitarists) gave you a big punch under your ass and at the same time kept you on the edge of your seat, while Vandermark’s last, unleashed solo was a piece of rhythmic inventiveness – a brilliant icing on the cake.
It was the kind of performance that sent you into the night with a broad grin: dynamic, fresh, challenging, at the same time tight and free. Both for the Americans and the Belgians, an experience that was amazing, you could even experience that with your eyes closed. You felt how this company transcended itself and how bands were forged, and you can only hope that it will lead to a new web of connections that will yield even more music. This concert was certainly recorded. It’s a start.
Link to original article in Dutch: http://www.enola.be/muziek/live/30420:visitations-i-marker-a-guests–29–30-maart-2019-de-studio?fbclid=IwAR0-YhzHZFHQp2zrGG5pyrC5mZF8apiKYn6UUrnu2QRxxXnqG9Tv_-0OVPo