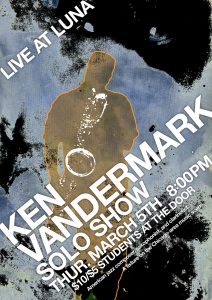 I’ve essentially been off the social media grid since I got back from performing with Istvan Grencso and his ensemble in Saalfelden and in Hungary during the middle of January.  Things have been busier than ever, however, and I’ll be bringing this journal up to date over the next days, starting with a report about the project with Istvan, then taking it forward from there.

Now, after a month an a half with only one performance (the “Yes We Can” fundraiser at the Hungry Brain on February 22nd, for the Roots of Music program based in New Orleans, with Jeff Albert, Sima Cunningham, Anton Hatch, Steve Marquette, Isaiah Spencer, and Macie Stewart), it’s time to take things back to the stage.

On Thursday, March 5th, at 8pm, at the Luna Cafe in De Pere, Wisconsin, I’ll be performing my first solo concert in a long, long time.  My thanks to Mark Patel of Luna for making this show possible.  I’ll be exploring my current interests and inspirations in a completely improvised format.  After a deep dig into composing eight new compositions for Marker that were workshopped and rehearsed over nine rehearsals with the band in January and February; the experience of hearing Éliane Radigue and Annea Lockwood’s music for the first time courtesy of Peter Margasak’s Frequency Festival in Chicago last week; and witnessing the tour de force solo bass recital by Brandon Lopez that started this year’s Option series at Experimental Sound Studio last night, I’m curious to see where the route of my solo music is headed…  Hope to see you there!