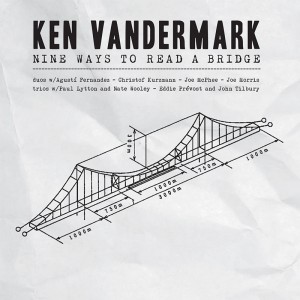 A friend recently described me as a “mid-career artist” which, now that I’m 50, I’m going to take to mean that I have another 50 years to continue with my work. I did make the decision to devote myself fully to music in 1986, when I was 25 (and if that’s the demarcation line that is used, the math on the mid-career algorithm puts a halt to things for me at 75, which is an equation I’m simply not going to accept). The truth is, however, that the first half of my life was completely informed by music: from going to hundreds of concerts in the Boston area with my folks as a kid to listening to endless hours of recordings played on the home stereo by my father; from starting to play the trumpet at age 9 to switching to the tenor saxophone at age 16 (they still had music programs in public schools back then…) and starting to organize my own bands and compose at that time; to going to college at McGill University in Montreal to study Film and Communications while taking basic harmony courses in the music department and nearly flunking out of them, until the devotion and dedication toward playing in my own band (called 4th Stream) superseded my academic studies. With that came the awareness that the thing that had informed more and more of my life up until that point had actually become my life. I had made the decision to completely devote myself to music without realizing it.

Starting with the Vandermark 5, Alchemia 12 CD box set, Marek Winiarski of Not Two Records has instigated some of the largest music projects that I’ve been involved with. In addition to the above collection, he helped organize two European tours and two residencies in Krakow by the ten member Resonance Ensemble (which have resulted in a box set, an LP, and 3 CDs so far), there has also been a box set of recordings by the DKV Trio, and many CDs by various lineups, including the final albums by the Vandermark 5.

So, when Marek approached me about putting together a collection of material to celebrate my 50th birthday I was flattered, but not surprised. Out of respect for his ongoing dedication to my work, I wanted to organize something unique, something that had not really been represented by my recording catalog up until this point. After thinking about it for quite some time, I made the choice to put together an anthology of music by configurations other than “working groups,” and which represent my work with pure improvisation, a parallel activity to my music that incorporates pre-composed elements. When my so-called “career” shifted from activity that occurred primarily in North America to that of Europe, as the 21st century moved into place it seemed that there was a growing lack of awareness in the States concerning my work with totally improvised music. Most likely this has been due to the fact that many of these performances have taken place away from “home,” and much of the work has gone undocumented, “into the air,” as Eric Dolphy might have described it.

Nine Ways To Read A Bridge is selection of recent recordings meant to help illustrate this other body of work I’ve been developing with improvisers over the last 15 years. There have been ongoing projects that work with music that is completely improvised, such as the duo with Paal Nilssen-Love, Lean Left, the DKV Trio, Fire Room, the duo with Tim Daisy, Sonore, Double Tandem, iTi, CINC, and the Peter Brötzmann Chicago Tentet, all of which have been previously documented. This anthology is meant flesh out the perspective on my activity in more “ad hoc” situations. I feel that this box set is extremely informative, not just about the range of aesthetics in my playing but also those of all the musicians involved. My thanks goes to them, and to Marek Winiarski for making this collection possible. I’m halfway to something, and wherever that is, all of the people connected this project continue to have an important hand in the process of getting there.