SHELTER is a collective of improvising musicians which features the compositional styles of four major figures from the international scene: Steve Heather (drums), Jasper Stadhouders (electric guitar & bass), Ken Vandermark (reeds), and Nate Wooley (trumpet).  Though a relatively new ensemble, the members of the group have much history together: Nate Wooley and Ken Vandermark have been working as a duo since 2013 and have released two albums, North By Northwest and All Directions Home; Jasper Stadhouders has been playing in Vandermark’s group, Made To Break, since the spring of 2014, which has released four albums since that time, with another due out on Trost in June of 2017; and Steve Heather is part of Stadhouders’ International Improv Ensemble.

After a brilliant tour of Europe in the autumn of 2015, which began at Tilburg’s Incubate Festival, SHELTER met in  Berlin in May of 2016 for two performances and an exceptional recording session at Studio H2, based in the old GDR Berlin radio headquarters.  The material was then mixed by Steve Heather, and is being issued in February 2017 as the 10th release on Audiographic Records in anticipation of their second tour in Europe, during March.

SHELTER’s music is derived from an extraordinary range of resources: including the stripped down pulse of post-punk to the liberating energy of true free jazz and, though only a quartet in size, it has an orchestra of sound and texture at its disposal- guitar, electric bass, trumpet, tenor and baritone saxophones, Bb clarinet, drums and electronics.  This is the sound of the future, now. 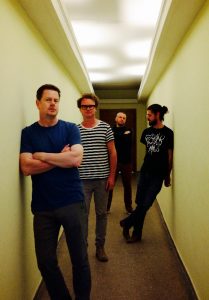 Steve Heather (AU-DE) is a freelance musician (drums, percussion, electronics) and composer, performance and installation maker based in Berlin. Born in Melbourne Australia Steve studied percussion / improvisation at the Victoria College of the Arts and Performance Art / Theatre at Das Arts/Amsterdam.

Steve was the co founder of the Amsterdam based electo acoustic music series, Kraak Geluiden and is also is the co-founder of the new media/ performance group SXS ENTERPRISE with Siegmar Zacharias and Xander De Boer.

Jasper Stadhouders (Tilburg, the Netherlands, 1989) plays electric guitar, acoustic guitar and bass guitar. He is an improviser, composer and concert organizer. He comes from a musical family and has performed music publicly since the age of 8. Jasper is an active member of the international improvised music circuit. He is a co-founder of the bands Cactus Truck (with John Dikeman and Onno Govaert), the Stadhouders/Govaert/De Joode Trio and plays in such diverse bands as Made To Break (with Ken Vandermark, Christof Kurzmann and Tim Daisy), Spinifex, the Amsterdam Real Book and Lily’s Déjà Vu.

In October 2014, The Ex invited Jasper to Ethiopia to play a number of concerts in Addis Ababa with saxophone legend Getatchew Mekuria. Past bands include The Black Napkins, .MAN, the Bureau of Atomic Tourism (BOAT), Michael Moore’s The Persons and the Ingebrigt Håker Flaten Chicago Sextet.

Future projects include a new quartet with Nate Wooley, Ken Vandermark and Steve Heather, an extended version of the Stadhouders/Govaert/De Joode Trio ft. Tobias Delius and a new large ensemble of European improvisers for the Incubate Festival 2015 in collaboration with Muzieklab Brabant, his first project as a leader.

He developed a personal and physical “hands-on” approach to his instruments, employing a wide variety of techniques that go beyond the convention. He takes part in countless of ad hoc improvised music settings whenever he can.

Jasper is also a composer and occasionally works in the fields of dance, theatre and as a performer of contemporary composed music. He’s played with Han Bennink, Ab Baars, Paal Nilssen-Love, Marshall Allen, Akira Sakata, Noel Redding, Andrew D’Angelo, Roy Campbell,  Jeb Bishop, Mars Williams, Michael Vatcher, Priya Purushothaman and many more. Jasper has performed extensively in Europe and the USA, as well as in Ethiopia, India, Japan and Russia. He has lived in Amsterdam since 2006.

Born in Warwick, Rhode Island on September 22nd, 1964, Ken Vandermark began studying the tenor saxophone at the age of 16.  Since graduating with a degree in Film and Communications from McGill University during the spring of 1986, his primary creative emphasis has been the exploration of contemporary music that deals directly with advanced methods of improvisation.  In 1989, he moved to Chicago from Boston, and has worked continuously from the early 1990’s onward, both as a performer and organizer in North America and Europe, recording in a large array of contexts, with many internationally renowned musicians (such as Fred Anderson, Ab Baars, Peter Brötzmann, Tim Daisy, Hamid Drake, Terrie Hessels, Mats Gustafsson, Elisabeth Harnik, Steve Heather, Didi Kern, Kent Kessler, Christof Kurzmann, Fred Lonberg-Holm, Paul Lytton, Lasse Marhaug, Joe McPhee, Andy Moor, Jason Moran, Joe Morris, Paal Nilssen-Love, Eddie Prevost, Eric Revis, Jasper Stadhouders, Chad Taylor, John Tilbury, Nasheet Waits, and Nate Wooley).

His current activity includes work with Made To Break, Lean Left, Shelter, DEK, The DKV Trio, Fire Room; duos with Paal Nilssen-Love, Tim Daisy, Terrie Ex, and Nate Wooley, as well as work as a solo performer.  Since June of 2015 has been co-curator of Option, a music series held on a weekly basis at the Experimental Sound Studio in Chicago.  In 2014 he began an independent label, called Audiographic Records, created to document special aspects of his work through albums and books. More than half of each year is spent touring in Europe, North America, Russia, Brazil, and Japan, and his concerts and numerous recordings have been critically acclaimed both at home and abroad.  In addition to the tenor sax, he also plays the bass and Bb clarinet, and baritone saxophone.

-Selected as one of the “25 For The Future,” the most significant improvising musicians under the age of 40, by Down Beat magazine, June 1998.

-Selected as a MacArthur Fellow in 1999.

-In 2004 was named among the “Musicians Of The Year” by All About Jazz, New York.

-Picked as one of Chicago’s “40 Cultural Heroes” by Time Out magazine in September 2008.

-Was the first musician to be featured leading his own groups two years in a row at the Newport Jazz Festival (the Vandermark 5 in 2009, Powerhouse Sound in 2010).

-Selected as “Artist in Residence” for the Chicago Jazz Festival, 2012.

-Guest curator at the 2013 edition of the Suoni Per Il Popolo music festival in Montreal.

-Invited to program a 12 set residency at The Stone by John Zorn, which featured 25 musicians from New York, the United States, and Europe; January 5-10, 2016.

Nate Wooley was born in 1974 in Clatskanie, Oregon, a town of 2,000 people in the timber country of the Pacific Northwestern corner of the U.S. He began playing trumpet professionally with his father, a big band saxophonist, at the age of 13.   His time in Oregon, a place of relative quiet and slow time reference, instilled in Nate a musical aesthetic that has informed all of his music making for the past 20 years, but in no situation more than his solo trumpet performances.

Nate moved to New York in 2001, and has since become one of the most in-demand trumpet players in the burgeoning Brooklyn jazz, improv, noise, and new music scenes.  He has performed regularly with such icons as John Zorn, Anthony Braxton, Eliane Radigue, Ken Vandermark, Fred Frith, Evan Parker, and Yoshi Wada, as well as being a collaborator with some of the brightest lights of his generation like Chris Corsano, C. Spencer Yeh, Peter Evans, and Mary Halvorson.

Wooley’s solo playing has often been cited as being a part of an international revolution in improvised trumpet.  Along with Peter Evans and Greg Kelley, Wooley is considered one of the leading lights of the American movement to redefine the physical boundaries of the horn, as well as demolishing the way trumpet is perceived in a historical context still overshadowed by Louis Armstrong.  A combination of vocalization, extreme extended technique, noise and drone aesthetics, amplification and feedback, and compositional rigor has led one reviewer to call his solo recordings “exquisitely hostile”.

In the past three years, Wooley has been gathering international acclaim for his idiosyncratic trumpet language.  Time Out New York has called him “an iconoclastic trumpeter”, and Downbeat’s Jazz Musician of the Year, Dave Douglas has said, “Nate Wooley is one of the most interesting and unusual trumpet players living today, and that is without hyperbole”.  His work has been featured at the SWR JazzNow stage at Donaueschingen, the WRO Media Arts Biennial in Poland, Kongsberg, North Sea, Music Unlimited, and Copenhagen Jazz Festivals, and the New York New Darmstadt Festivals.  In 2011 he was an artist in residence at Issue Project Room in Brooklyn, NY and Cafe Oto in London, England. In 2013 he performed at the Walker Art Center as a featured solo artist.

Nate is the curator of the Database of Recorded American Music (www.dramonline.org) and the editor-in-chief of their online quarterly journal Sound American (www.soundamerican.org) both of which are dedicated to broadening the definition of American music through their online presence and the physical distribution of music through Sound American Records. He also runs Pleasure of the Text which releases music by composers of experimental music at the beginnings of their careers in rough and ready mediums.