Made to Break Reviewed in Free Jazz Blog!

Ken Vandermark’s Made to Break Live – Systems vs. Artifacts Extravaganza

Monday, October 03, 2016  *****, Chicago  No comments
By Eyal Hareuveni
Ken Vandermark’s Made to Break quartet is one of his most radical and experimental ensembles ever. Made to Break was founded in 2011 and is a kind of a sound lab that enables Vandermark to play with elements inspired by Ethiopian music – as distilled from his playing with the Dutch group The Ex and the late Ethiopian sax player Gétatchèw Mèkurya, ideas drawn of New Music, as explored by iconoclast composers as John Cage and Morton Feldman. And, obviously, mixing these elements with his inclusive, forward-thinking perspective of modern jazz and free improvised music.
The unique instrumentation of the quartet – Vandermark on tenor and baritone saxes and clarinet; Austrian Christof Kurzmann, who began to collaborate with Vandermark on his project, El Infierno Musical (El Infierno Musical. A Tribute To Alejandra Pizarnik, Mikroton, 2011), on the ppooll audio software; fellow Chicagoan drummer Tim Daisy, who collaborates steadily with Vandermark since the days of the seminal Vandermark 5 and later with the many other outfits, including the Resonance Ensemble and Audio One groups; and the newest addition to the quartet, Dutch electric bass player Jasper Stadhouders, who joined the quartet in April 2014 (replacing original bass player Devin Hoff who played on the quartet first three releases) – as well as the singular personalities of all four musicians and their diverse approaches, offer Vandermark almost infinite opportunities to explore new textures with each composition and every performance.
The accumulative, diverse experiences of these four musicians guarantees the constant, risk-taking evolution of its sonic envelope. Kurzmann played alto saxophone and clarinet before he switched to electronics, focusing on exploring a highly personal and expressive approach of playing electronics. Stadhouders is also a guitarist, known from the explosive free jazz trio Cactus Truck or the more eclectic pan-European quintet Spinifex, and Daisy often blends contemporary perspectives in his composed, electro-acoustic works. With such resourceful musicians, Vandermark can construct and reconstruct his compositions with changing elements of melody, sound and groove-based rhythms as an ever-evolving works-in-progress on every performance of the quartet.
The following three live albums, released on Vandermark’s ‘Systems vs. Artifacts’ imprint of his Audiographic label, document the versatile spirit of this quartet and its rich language during its November 2014 European tour. 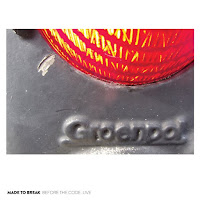 The first live recording is from one of Vandermark’s favorite European clubs, Klub Dragon in Poznan, Poland, captured on from November 5, 2014, the second date of Made to Break at the club and about a week before the quartet recorded its fourth album, Before the Code (Trost, 2015). This recording features the same sequence of compositions prepared for the recording session but in radical alternate realizations.

The opening piece, “Dial The Number” (dedicated to the Belgian-French director Agnès Varda), already establishes the integral role of Kurzmann within the multifaceted, driving rhythmic sensibility of the quartet. His commanding and inventive use of an electronics-based language charges Made to Break’s interplay with a built-in dimension of tension, surprise, and danger. He interferes, expands, and challenges ideas about melody, linear structure, sonic cohesion, and pulse. Kurzmann’s contribution intensifies the ongoing, powerful commotion to steer the collective, rhythmic groove to more abstract searches. The more lyrical “Off-Picture No. 119” (dedicated to the Copenhagen-based, Doxycycline British-American director Joshua Oppenheimer), combined with the dramatic progression of “Windows Breaking Hammer” (dedicated to German director Rainer Werner Fassbinder), stresses both the immediate manner that Vandermark, Stadhouders and Daisy can adapt and incorporate any of Kurzmann’s ideas, as the anarchist, twisted-accordion sounds or the Sun Ra-tinged wild, atmospheric flights, into their strong, groove-based ride. Made to Break finishes this intense set with the short, sketchy encore “Dragon Improvisation”. 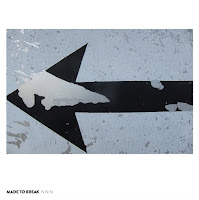 The second live installment was recorded at the Martinschlössl in Vienna, Austria on November 13, 2014, right after the Made to Break finished the recording session of Before the Code (Trost, 2015) at the Amman Studios. The quartet sounds energetic, buzzing with adrenaline and excitement from the successful recording, playing expansive and powerful interpretations of old compositions in entirely different combinations than those explored before.

The opening, 35-minutes of “Before and After” (dedicated to American photographer Lee Miller) features Vandermark and Kurzmann, with an imaginative reeds-tinged sound, exchanging solos. Their different languages often blend into one dense and rich sonic unity, resonating and deepening each other articulations even in the most abstract, searching and lyrical segments, as if both were engaged in a kind of fast, busy talk. “Off-Picture No. 119” is interpreted this time in a loose rhythmic approach that highlights the clever and dynamic interplay of Stadhouders and Daisy.
The slow-cooking “For and Against” (dedicated to American minimalist artist Carl Andre) is introduced by a brilliant, extended solo bass of Stadhouders that cements the piece rhythmic spirit, later joined by Daisy, Kurzmann, and Vandermark, that keeps intensifying Stadhouder’s leading role. A short free-improvised piece introduces Made to Break closing piece, the 30-minutes explosive and most radical “That Life” (dedicated to German dada sound poet Kurt Schwitters). Vandermark plays in a his most fiery, free jazz mode, colliding again and again with the subversive, otherworldly blows and noises of Kurzmann, both enjoy the massive yet playful rhythmic drive of Stadhouders and Daisy. 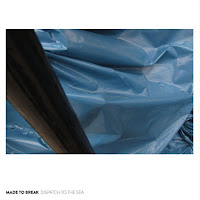 The third live installment was recorded on the eleventh stop of this packed tour at Het Stadsmagazijn in Antwerp, Belgium on November 18, 2014, four days before the tour ended. On this later date the quartet incorporates elements from compositions written for Cherchez la femme (Trost, 2014) to newer pièces.
The opening piece, “Waiting Waiting” (dedicated to Belgian director Chantal Akerman), settles immediately on a muscular funky pulse, but soon is spiraled to distant sonic universes with Kurzmann wild electronics. Stadhouders cements the throbbing pulse of this piece with his fat bass lines throughout its many shifts and extended solo parts. The following 29-minutes of “A Cacophony Of Words” (dedicated to American novelist William Gaddis) highlights the unique interplay between Vandermark and Kurzmann. Surprisingly, their interaction is quite physical given that Kurzmann plays only on a laptop, often a confrontational one, sometimes Kurzmann even takes the subversive role of  deconstructing the loose architecture of this piece and suggesting a futuristic one. This set is concluded with “Off-Picture No. 119”, that was already featured in both previous live installments. This time the interpretation emphasizes the flexible rhythmic sensibility of all four musicians, as a tight, collective and as resourceful soloists.
Originally Published http://www.freejazzblog.org/2016/10/ken-vandermarks-made-to-break-live.html