DEK in a new improvised music trio that features Austrians Elisabeth Harnik (piano) and Didi Kern (drums), and American Ken Vandermark (reeds), who have been performing together since September of 2014, both in Europe and in the United States.  2016 has been an exciting year for the band- in January they were featured as part of Vandermark’s residency at the Stone in New York City, and in autumn they released their first album, called “Burning Below Zero,” on the Trost label, which received a 4 star review by The Free Jazz Collective.

Their music has a wide range of influences: sources based in Harnik’s work as an internationally acclaimed new music composer, Kern’s profile on the European underground rock scene, and Vandermark’s two decades of work at both home and abroad, touring, recording, and collaborating with dozens of world renowned musicians as diverse as Getachew Mekuria and John Tilbury.  The combination of these diverse backgrounds and open-ended musical curiosity has developed an extraordinary group aesthetic- inclusive, expressive, and instantaneous. 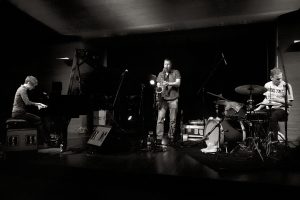 Elisabeth Harnik: free-lance composer and pianist, was born 1970 in Graz and lives in Gams (County of Styria/Austria). She studied classical piano and later – with Beat Furrer – composition at what is now the University of Music and Performing Arts, Graz.

The „repertoire“ and it´s extensions in composition and improvisation is her central focus. Harnik works within an electro-acoustic inspired sound-world, using unique preparations and extended techniques.

In addition to her work as composer she appears as improvisator at various national and international festivals such as the V:NM-Festival, the Ulrichsberger Kaleidophon, the Nickelsdorfer Konfrontationen, the Artacts Festival St. Johann, the  Music Unlimited Festival Wels, the Soundgrube Vienna, the Comprovise Festival Cologne, the Beethoven Fest Bonn, the A L’ARME! Festival Berlin, the Jazz & More Festival Sibiu, the Audio Art Festival Pula, the Krakow Jazz Autumn Festival, the Alpenglow Festival London, the All Ears Festival Oslo, the Umbrella Music Festival Chicago, the Okka Fest Milwaukee, the Musicacoustica Beijing, the SoundOut Festival Canberra/AUS, the Jazz na Fábrica Festival São Paulo/Brazil a.o.

Besides her solo performances she is member of many ensembles for improvised music (Barcode Quartet, Plasmic Quartet, Wild Chamber Trio, DEK, ReDDeer a.o.) and has performed with numerous internationally respected musicians. She has toured in Europe, USA, China, Australia, Brazil and her compositions are performed regularly at concerts and festivals for contemporary music.

Didi Kern: started to play the drums in marching bands, soon performed in rock, improvised music and techno contexts, is mainly known for his contributions in bands like Bulbul and Fuckhead.  He is also a founding member of Broken Heart Collector and a collaborator with international musicians like Philipp Quehenberger, Ken Vandermark, Mats Gustafsson; and is also active in the field of riding his bicycle.  Tours have taken him to places like the Royal Festival Hall / London, Museum Serralves / Porto a.m.o.

His current activity includes work with Made To Break, Lean Left, Shelter, DEK, The DKV Trio, Fire Room; duos with Paal Nilssen-Love, Tim Daisy, Terrie Ex, and Nate Wooley, as well as work as a solo performer.  Since June of 2015 has been co-curator of Option, a music series held on a weekly basis at the Experimental Sound Studio in Chicago.  In 2014 he began an independent label, called Audiographic Records, created to document special aspects of his work through albums and books. More than half of each year is spent touring in Europe, North America, Russia, Brazil, and Japan, and his concerts and numerous recordings have been critically acclaimed both at home and abroad.  In addition to the tenor sax, he also plays the bass and Bb clarinet, and baritone saxophone.  In 1999 he was awarded the MacArthur prize for music.